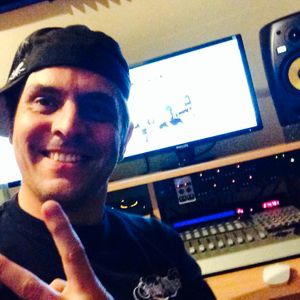 I was born in Yorkshire, UK and live there till age 11 years, then I moved to Cornwall, UK with my parents. While in Cornwall I took an interest in music and surfing (along with computers which I got involved with back in Yorkshire). I started learning a few different instruments at school, but stuck with learning the guitar for some time, then moved on to piano, and stay with piano tuition for around 2 years, learning to read, write and compose music.

I stopped learning piano around 18 years old and concentrated more on surfing and work and didn’t really do anything with music for some years. Then 1994 I went to Spain on holiday and ended up living there and getting married, and I now have a family with 2 sons. While in Spain I took up harmonica playing with the help of a friend.

In the year 2000, we moved back to the UK with my family and settled back in Wadebridge, Cornwall, where I took up more musical activities, playing with other musicians as jam nights and open mic nights. I eventually started to learn the drums and over time became a professional drummer gigging in a local band around the Southwest. I also took up in DJing as a hobby!

Through my involvement with studio production and being a DJ, I started to take an interest in making my own music, thanks to one of my recording clients who encouraged me to become more than just a DJ who mashes up other peoples music, but also a DJ producer!

So here we are, I now make my own original dance music and also remixes as well. My tracks get played on UK BBC Introducing!

I hope you enjoy my music as I enjoy making it for you all to listen to!

I also run my own Mobile DJ business and you can hear example mixes on my Mixcloud account!

This website uses cookies to improve your experience while you navigate through the website. Out of these cookies, the cookies that are categorized as necessary are stored on your browser as they are essential for the working of basic functionalities of the website. We also use third-party cookies that help us analyze and understand how you use this website. These cookies will be stored in your browser only with your consent. You also have the option to opt-out of these cookies. But opting out of some of these cookies may have an effect on your browsing experience.
Necessary Always Enabled
Necessary cookies are absolutely essential for the website to function properly. This category only includes cookies that ensures basic functionalities and security features of the website. These cookies do not store any personal information.
Non-necessary
Any cookies that may not be particularly necessary for the website to function and is used specifically to collect user personal data via analytics, ads, other embedded contents are termed as non-necessary cookies. It is mandatory to procure user consent prior to running these cookies on your website.
SAVE & ACCEPT
Translate »